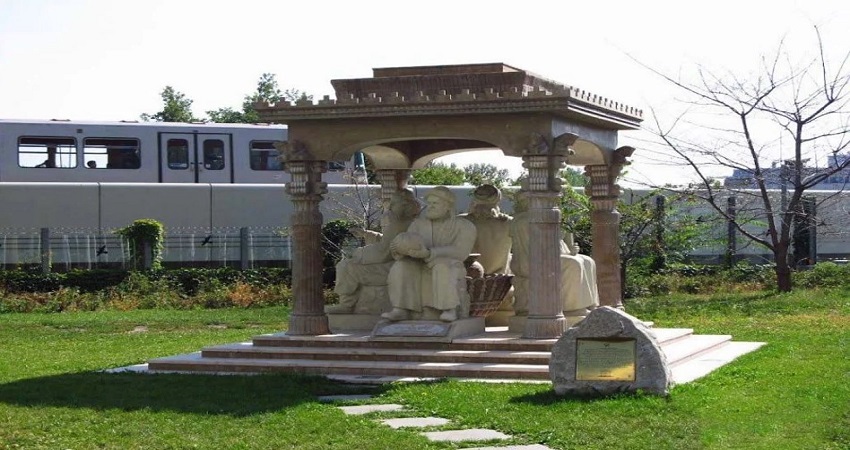 There is an old famous saying, “Art rests with Iranians only.” Over the past centuries, it was the Persians who showed the world the way in various artistic skills. The history of Iran is also replete with names of eminent scholars in different fields of science, renowned for their major contributions to scientific development.

The world has come to know them through the books they left behind as well as their works of art. There are many drawings and statues of Iranian scholars all over the world and traces of Iranians can be seen.  we intend to introduce one of the most attractive and famous memorials of Iranian scientists in the world so that maybe their names and memories will be revived.

This beautiful work is called the Persian Scholars Pavilion, which is located in front of the United Nations office in Vienna. The Persian Scholars Pavilion at the United Nations in Vienna, Austria features the statues of four prominent Iranian figures. Highlighting the Iranian architectural features, the pavilion is adorned with Persian art forms and includes the statues of Avicenna, Abu Rayhan Birouni, Zakariya Razi (Rhazes), and Omar Khayyam.

Each of these scientists looks to one corner of the world, which tells of the spread of their knowledge to the four corners of the world. The material of this pavilion is made of marble and is made in the style of Islamic-Achaemenid architecture, of course, there are signs of other types and styles of it.

This beautiful arch was built in Iran and was donated to Vienna by the government of our country in 2009 as a symbol of peace, and is now located to the right of the entrance to the United Nations building in Vienna.

Hakim Omar Khayyam (1048-1123) lived in Neishabour in the fifth century AH. He was one of the most important scientists of the time and worked in the fields of philosophy, mathematics, astronomy, poetry, and quatrains. Khayyam was one of the greatest poets of the Seljuk era. It is interesting to know that although Khayyam worked in various fields, he is known for his quatrains. Among his most important actions are the following: -Head of the Iranian calendar, when Khajeh Nizam-al-Molk was the Seljuk minister -Introduced new theories about equivalence ratios -Amazing achievements in mathematics, astronomy, music, and literature

Abu Rayhan Birouni (973-1048), considered by some as the founder of Indology, worked in various fields such as astronomy, chemistry, geography, and geology. He is believed to be the first person who said the Earth rotates. He is also known as the first Muslim scholar to study India and the Brahminical tradition. Known as a prominent alchemist, chemist, physician, philosopher, and scholar.

Avicenna (980-1037) was a Persian polymath and the father of modern medicine, who influenced many literary and scientific figures including the renowned poet Omar Khayyam. His magnum opus is an immense encyclopedic work called ‘The Book of Healing’.

Abu Bakr Mohammad Ibn Zakariya al-Razi (865-925), known in the West as Rhazes, is widely recognized for the discovery of alcohol and sulfuric acid. He has also written numerous notes on diseases such as smallpox and chickenpox.