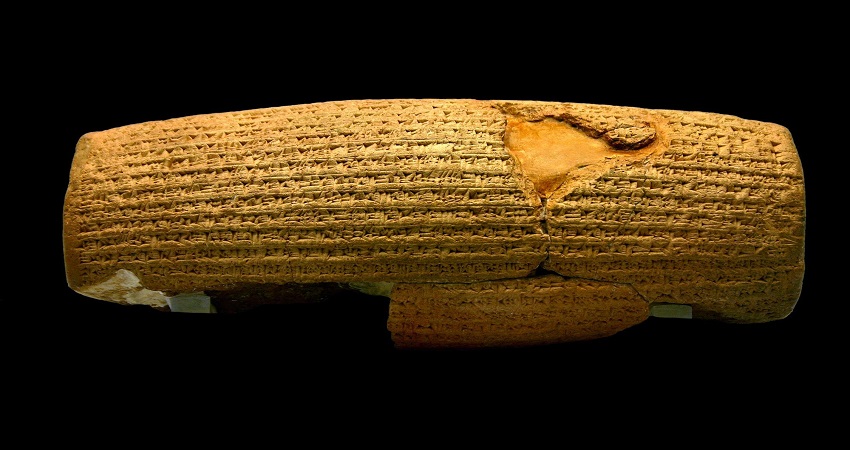 The Cyrus Cylinder regarded as the first human rights charter in history. It is a document issued by the emperor Cyrus the Great of Persia inscribed in Babylonian (Akkadian) cuneiform on a clay cylinder.

Passages in the text, express Cyrus’ respect for humanity, and as promoting a form of religious tolerance and freedom. There are three main premises in the decrees of it: the political formulation of racial, linguistic, and religious equality, slaves and all deported peoples were to be allowed to return to home, and all destroyed temples were to be restored.

The inscription was translated into all six official U.N. languages in 1971. A replica of the cylinder is kept at the United Nations Headquarters in New York City in the second-floor hallway, between the Security Council and the Economic and Social Council chambers.

In the 6th / 6th century BC, while excavating British archeology at the ancient site of Babylon in Mesopotamia, Mesopotamia, Hormuzd Rassam, a British Assyrian archaeologist, found a flower cylinder containing cuneiform inscriptions.

The Cyrus Cylinder is made of clay, 2.5 cm long and 2 cm wide, with 2 rows (except for the damaged parts) written in Akkadian script and language. Subsequent studies showed that the cylindrical writings were written in the year 5 BC by Cyrus the Great after the defeat of Nabonidus and the conquest of Babylon.