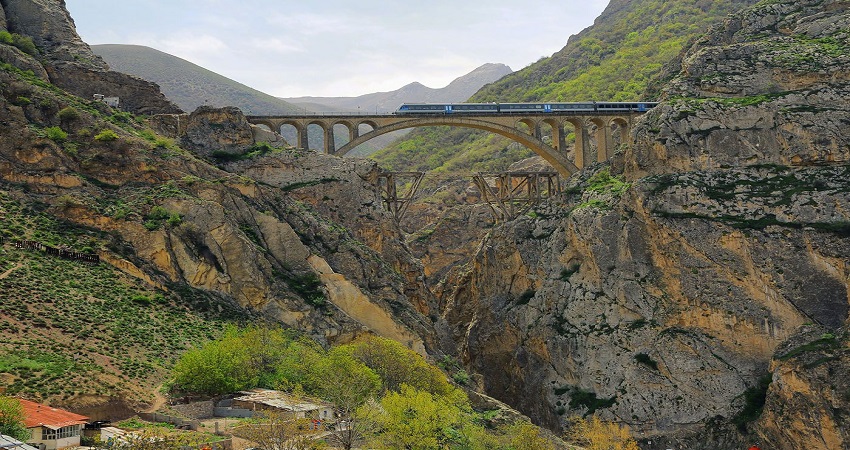 Veresk Bridge is a masonry arch bridge in northern Iran. It was mainly built by the Austrians before World War II under the leadership of engineer Walter Aigner, built during the reign of Reza Shah in 1936.

It is located in Versak district of Savadkuh County, in Mazandaran province. One of the masterpieces of engineering, this bridge was reopened in 1937. The Versak Bridge, which connects the Tehran-North Railway, was built at the height of 110 meters from the bottom of the valley with a 66-meter arch span with primitive equipment.

Veresk bridge which has been registered on the National Heritage List for its unique characteristics, consider as one of the most important technical works of railway engineering in the north of Iran.

Veresk was built by the Danish company Compassax with a 70-year guarantee, is one of the strategic bridges of Iran. According to the local indigenous, when the bridge was built by the order of Reza Shah, the bridge’s engineer with his wife and children were under the bridge while passing the first train on the bridge, so that the insurance of the made structure be proven.

Walter Aingeray’s tomb is located near the Veresk Bridge. The bridge was called the pirouzi (Victory) Bridge by Churchill during the Second World War. This bridge is only for train crossing, and now the trains of Tehran-Sari and Tehran-Gorgan pass several times every day after more than 70 years.

One of the wonders of this bridge construction is the absence of any steel structure. For the construction of the bridge, two concrete foundations were created on both sides of the mountain, connected, and then a brick facade was applied on it.

Now, as a historic and important documentary of our country, Veresk bridge has become a tourist attraction in the north of our country and is visited by many enthusiasts every year.