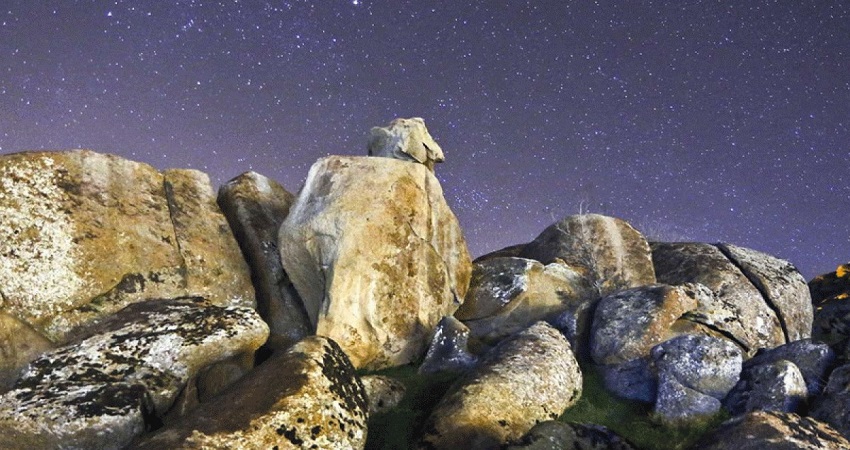 Khoranj is a village near the Lajan district in the town of Piranshahr in the northwestern of West Azerbaijan, Iran. Near the village, there is an area covered in mammoth rocks which surprisingly lie on one another. The rocks have beautiful and great carvings that depict various animals and objects, which occupy the mind.

The rocks look more like what is found in myths than in reality. The region where the rocks are located covers an area of around five square kilometers as a stretch of land spanning all the way from the east to the west crossing the north of the village.

Locals have legends about these rocks. Some attribute them to the story of the Prophet Lut. They say residents of the area committed a major sin (sodomy) at the time, and, suffered divine retribution whereby they themselves and their homes turned into rock.

Some also believe the rocks were beasts who severely oppressed people, who, in turn, cursed them, and as a result, the beasts and their homes all turned into rock. There are other legends, too.

Sir Robert Ker Porter of Britain has, in his book, mentioned the legends about Khoranj. This renowned diplomat, painter, and tourist was interested in archaeology.

His record of historical discoveries includes the discovery of the tomb of Cyrus the Great, the founder of the Achaemenid Empire. In 1820, he heard the story of Khoranj from an old man in Baghdad, which made him travel to Mahabad and then the Khoranj village.

In his book, Ker Porter says there are remnants of a large city near a village called Khoranj. He says the area is covered with numerous humanoid pieces of rock, which bear traces of God Almighty’s wrath and retribution.