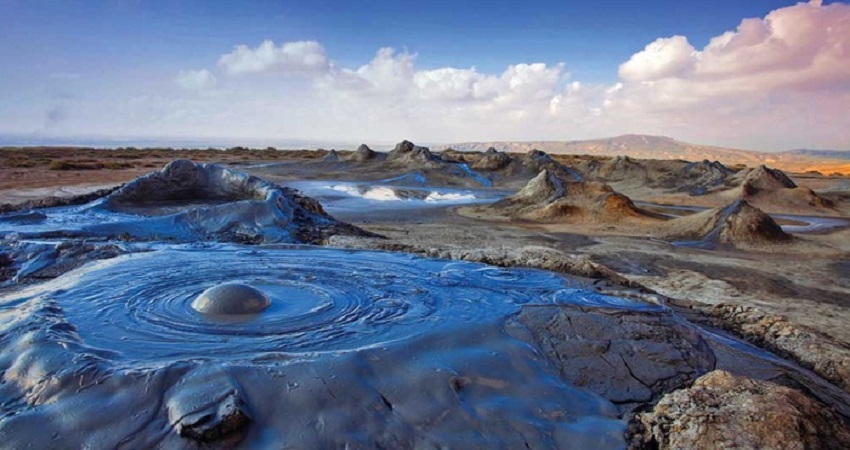 Gel Afshan or Mud volcano is a natural phenomenon during which the mud underground reaches the surface like a spring and forms a mound. Mud volcanoes in Chabahar are stunning, rare, and exquisite natural geological attractions that have the potential and advantages of becoming a world monument as the second geopark in the Middle East.

There is a conoid mud volcano mountain in the north of Kahir-Tonog Road (southern part of Kahir / Zar- Abad Road) in Sistan and Baluchistan which is the greatest and most famous active mud volcano mountain in Iran. Their mud volcanoes are located 95 km from the west of Konarak and Kahir Plain before tonog village on flat land and include there, small mud volcanoes, one of which looks like a volcano that is active at the moment.

The rest of them became inactive several years ago. On top of these hills, there are openings and grey mud continuously comes out of the one that is active at the moment and it flows down the hillsides. Address: Bandar-e Tang, about 100 km from Chabahar city, Sistan and Baluchistan province, Iran.

The origin of the formation of volcanoes on the adjacent coast of the Oman Sea is the pressure resulting from the movement of the oceanic plate.
Due to the presence of minerals and minerals in the flowers of the volcano, it is useful and effective for the treatment and treatment of many skin diseases, vasoconstriction, joint pain, lumbar pain, and muscular stenosis.
It is sticky and hardens so many people use it for making pottery, pottery, and toys for children.

The coastal cities of Chabahar and Konarak in the vicinity of oceanic waters and as the only oceanic ports of Iran have more than 420 unique naturals, tourism, and historical attractions that are attractive and spectacular for any domestic or foreign tourist.