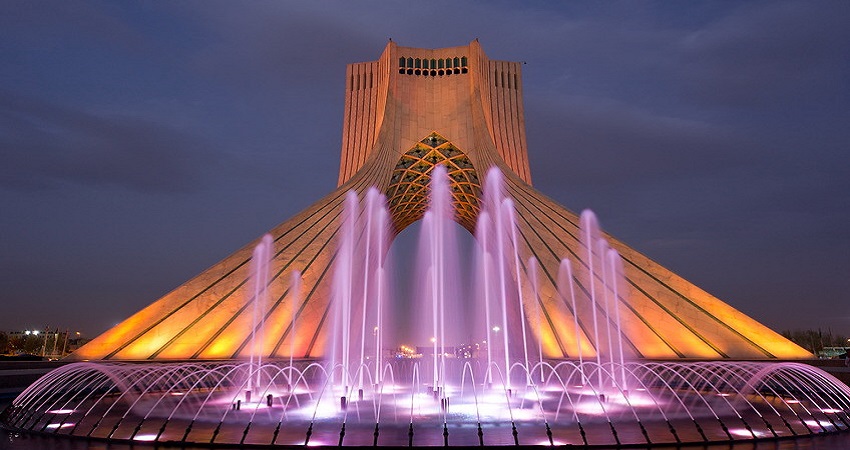 The inverted-Y-shaped Azadi Tower, built-in 1971 to commemorate the 2500th anniversary of the first Persian empire, is one of Tehran’s top monuments.

Designed by Hossein Amanat a 24-year-old architecture student, who won a competition to design this eye-catching structure. The monument, formerly known as the Shahyad Tower, Combine elements of both pre-and post-Islamic architecture.

Tower architecture is a combination of Achaemenid, Sassanid, and post-Islamic architecture symbols in Iran. According to the tower’s architect, Hussein Amanat, the motifs in the square that forms flower-beds were inspired by the design inside the dome of Sheikh Lotfollah Isfahan.

The tower consists of three floors with four elevators, two staircases, and 286 stairs. In the basement of the tower, there are several theaters, galleries, libraries, museums, and more. The building is 63 meters long, and 45 meters high from the ground.

Forty-six thousand pieces of cut and polished rock are said to have been used in the construction of the Azadi Tower. Azadi Sq was the scene of many protests during the 1979 revolution and remains a focal point for demonstrations today, including some huge demonstrations during the post-election crisis in 2009.

Visitors who fly domestically will catch a bird’s-eye view of this gatekeeper before landing at Tehran Mehrabad International Airport and being swept up by the maelstrom of traffic around the massive square.

By taking the stairs or elevator to the top, you can behold buzzing, modern-day Tehran. The crypt museum, on the other hand, displays various ancient cuneiform tablets, ceramics, and pottery, as well as a replica of the Cyrus Cylinder (the original of which is housed in the British Museum).

Start your Tehran city tour by visiting Azadi Tower. Visit there soon after sunrise or let it be the final accord in your trip.