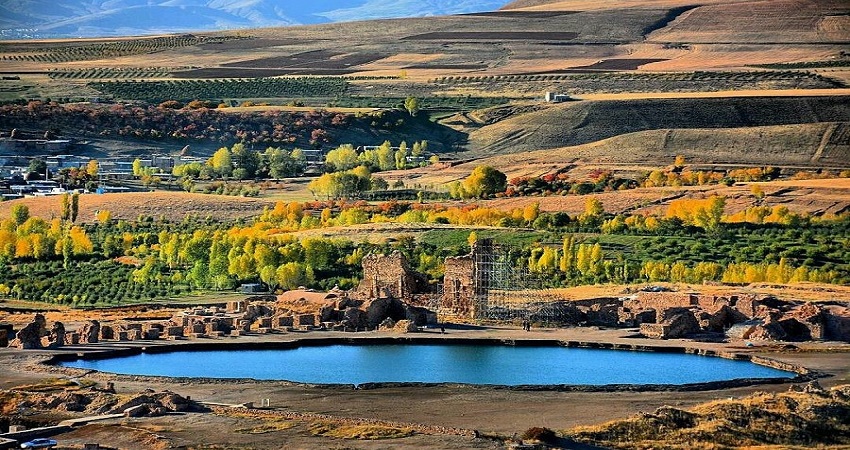 Takht_e_Soleyman(also known as Azar Goshnasp Fire Temple) is the name of the outstanding archeological and historical site near the modern town of Takab and Takht-e Soleyman located 45 km northeast of Takab County in West Azerbaijan province, northwest of Iran.

This site was inscribed by the UNESCO World Heritage Site on 3 July 2003. Takht_e_Soleyman is literally translated as Solomon’s Throne. This place is the home of one of the three principal famous Sassanid fire temples and the holiest shrine of Zoroastrianism. This heritage site left from the Sassanid era (226–650 AD). Before Islam, this place was the most important and biggest social, cultural, educational, religious, and worship center of Iranians.

These are built around the Takht_e_Soleyman Lake with a depth of 112 meters and inside an oval wall. There are also two adjacent sites, namely Kooh-e Belgheys (Belqeys Mountain) and Zendan-e Soleyman (Solomon’s Prison).

Belqeys Mountain lies 8km northeast of this complex with two peaks of about 3200 and 3655 m high. The citadel and fortifications of Belqeys Throne are located on the southern peak. Fortifications have watchtowers overlooking the region.

Solomon`s prison, It`s a conical hill lying 3km west of this complex with a height of about 100m above the surrounding plains. At the summit of this hill, there is a deep crater about 60 m in diameter which most likely was filled with water two thousand years ago. The reason for such naming is a local legend which says here is the place in which Solomon imprisoned disobeyed demons. It was a Zoroastrian place of worship and sacrifice in the Sassanid era.