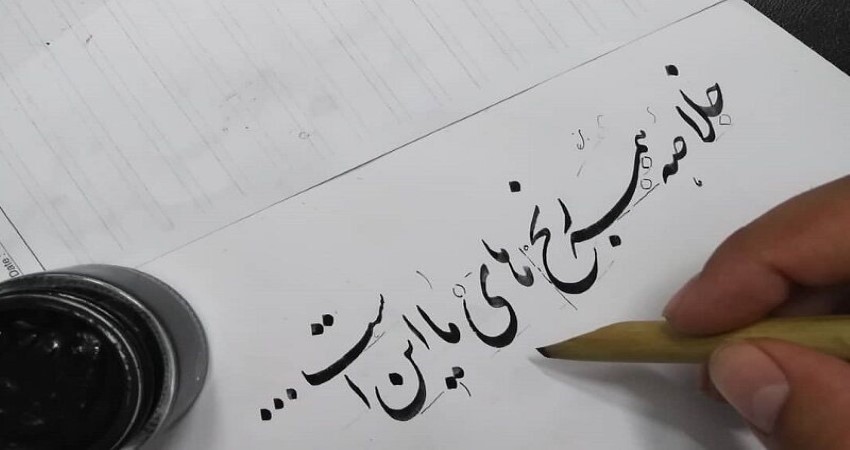 Before Islam, various scriptures including cuneiform, pehlevi, and zand were widespread, but after the advent of Islam, Iranians accepted the Islamic alphabet and scriptures.

Most of the transmissions of both ordinary and calligraphic scriptures were made by the Iranians. They brought this art to its peak, inventing new styles and new writing tools. The same phenomenon is found in countries then under Iranian influence, including the countries of Central Asia, Afghanistan, Pakistan, and India. Thus calligraphy in this region was considered to be the most distinguished of the visual arts having its specific aesthetic. The Iranians were thus at the origin of the following main calligraphic styles:

Ta’ligh or tarassol style: This style is one of the first to have been invented by the Iranians, probably around the middle of the 14th century, by a combination of the towghi ’and reghâ’ styles but also under the influence of pre-Islamic Iranian calligraphic styles.

Nasta’ligh style: It is also distinguished from Naskh by a softening of the ridges in the writing. This calligraphic style originated in Iran where it remains one of the styles most used by contemporary Iranian calligraphers.

Mo’alla Style: This style was invented in 1999 by Hamid ’Ajami. It is used in many graphic works or advertisements with religious content.

Naghâshi-khatt (painting-calligraphy): this style of modern Iranian painting and modern calligraphy was created in the 1950s and 1960s by certain Iranian painters and calligraphers. It can be seen as a kind of fusion between pictorial and calligraphic art. This style is now part of the contemporary Iranian art landscape.